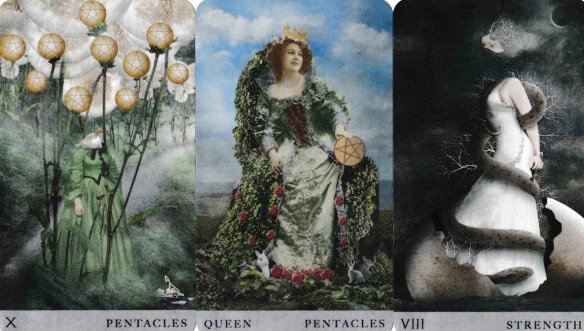 Hmm, yesterday I drew the Queen followed by the 10 of Pentacles, today it’s the other way ’round. So clearly these energies still need to be explored further.

I think, in this instance, my ancestors are showing me the path to inner strength. They’re reminding me that I need to shuck the persona I wear for others and reconnect with my true inner self. It’s time to stop pretending. The best way for me to fully manifest and fulfill all my potential is to focus on what’s important to me. I need to find what I believe truly matters, not focus on what other’s think should be important to me. Once I’ve nurtured my inner and outer selves, honored my physical, spiritual, emotional and intellectual sides then I will become truly strong. That’s when I’ll be honoring myself and my ancestors.

The fact that I’m feeling so overwhelmed and burdened by responsibilities is causing me to let things slip through the cracks.  I have an opportunity to reignite my spark but I have to take it.  With all the obligations I’m burdened with right now I feel as though I don’t have the right to take time for myself but these cards are telling me that I need to change that perception.

If I want to create a better relationship with my spirit guides then I need to stop letting my responsibilities be an excuse and just do something.  It doesn’t need to be elaborate.  I think it’s a question of taking 10 minutes or so every day and just being more mindful and open to connecting with the spirit world.  Right now I feel like a rat trapped in a barrel – I’m running in circles, using up all my energy and getting no where.  I’m exhausted, drained and defeated.  The only way I know to counter-act this is to take some time for myself; to be still and listen.

This isn’t exactly mind-blowing news.  I know the answer and realize the Tarot is reinforcing what I already knew but have been avoiding.  Small steps, baby steps – that’s all it takes.  I don’t need to reach the goal line in a week.  I didn’t get to this point in my life overnight so why I think the solution should be a quick fix is beyond me.  To paraphrase Robin Byrd, I need to lie back, relax and get comfortable – at least for a few minutes every day.

The 7 of Air shows the coins of the I-Ching, an ancient Chinese oracle.  I’m familiar with it although I’ve never used it.  In the companion book Barbara explains that the Yin-Yang energy of the I-Ching should be the focus when this card appears.  It suggests that the question already has the answer in it.  In other words, I already know the answer to this and just need to focus on applying it.

The 4 of Cups reversed shows Brigid once again this time in her healer aspect.  She is holding a chalice towards me with her left hand and a small flame hovers above her right.  Whether I choose to accept the chalice is up to me.  However I get the sense that if I want to move forward and heal myself in this area I need to accept the chalice.

One of the things I’ve realizing from the cards I’ve pulled this week is that the past continues to influence my behaviors.  I may think I have left that behind and found healthier ways to deal with life but that’s just not the case.  These insidious and subversive patterns and embedded in my brain cells.  They can’t be rooted out until I acknowledge they exist and begin to take those steps to change them.

I have often written of knowing what I need to do and not doing it.  I think that is the answer to this question.  I can make a bulleted list of what will get me on track and remove these hindrances but I don’t do them.  This dysfunction is familiar to me and as the saying goes “better the devil you know”.  I’m hoping this devil and I have done our last dance.  I’m sure we’ll still occasionally partner up – we’ve been engaged in this little contretemps for a long time, but it’s time to change up the dance card.  Just because this devil knew me first doesn’t mean he knows me best.  I know I can do this, I can make these changes and stop repeating these patterns but first I need a cup of tea.

Oh goody, two reversed cards.  I just love reversals.  Actually, all snarkiness aside, this makes perfect sense in terms of the question and the issue I’ve been visiting this week.  While discussing my reading on Monday with a friend she posed the question I’m using today.  She pointed out that we often repeat behavioral patterns we learned in childhood and from our families even when they’ve ceased to be useful.  In my family financial stability was an illusion for most of my childhood.  My parents were perpetually broke which resulted in a lot of change and upheaval.  At the same time there was a small core of stability in my life because we always moved around in the same neighborhood and my maternal grandmother was always part of my childhood.  This created a situation in me that means I’m uncomfortable with stability because I’ve never known it; it’s uncharted territory for me.

As my friend pointed out, I tend to thrive in chaos.  I perform well under pressure.  In fact I spent most of my academic career function that way.  I regularly waited until the last minute to complete assignments and received great grades.  As a result I never felt the need to learn effective time management skills or become more organized.  Now I’m starting to realize that if I want to be a successful entrepreneur I’m going to need to acquire just these skills.

The Goddess (Empress) reversed is reminding me that abundance and prosperity were scarce in my childhood.  As a result I’m not fully sure how to manage them.  This results in situations where I either overspend while I have money or am not able to effectively budget when things are tight.  I end up finding myself in stressful and chaotic situations.  In the past this has been annoying but not created serious problems.  Now that is no longer the case.

Omens/Warnings (The Tower) reversed is telling me I haven’t fully dealt with some of the fallout from our changed circumstances.  I am able to deal with the craziness that results from caring for the in-laws (once again thriving in chaos) but long-term planning and financial stability are just not a focus right now and they need to be.  We’re so busy acting on what’s going on today that we aren’t planning for tomorrow.  We’ve also learned that several of the plans we had made are no longer feasible.  We haven’t fully dealt with those changes either.  It’s as though the lightning has hit the tree and a huge branch that is now broken hangs over my house but I don’t see the urgency in removing it.  That’s just short-sighted and irresponsible.  It’s also another pattern I learned in childhood.  I had so little control over the craziness around me that I just gave up (in certain areas).  I focused on what I could control and excelled in school and other arenas.

So now that I can see these lingering childhood patterns my next step is to change them.  I just need to take some baby steps so that I can gain some mastery over this area.  Towards that end I’m reading about time management and making some efforts to actually implement them in my life.  I doubt it will be easy but at least I’m learning.

The other day I pondered what conflicts me about more assertively pursuing a career as a professional Tarot reader.  One of my main issues is the need to promote and market myself.  Another is that I’m not fully comfortable accepting reading requests when I know there will be times I’m not in the mood to proffer the requested service.  I’ve reached out to several friends about the issue and received some very helpful advice many of which involve changing my mindset about the entire process.

So today I decided to take another look at how to works towards settling this matter.  I drew the 6 of Swords which reminds me of a faceted gem or panes in a window.  On one level this image speaks to me of being a piece of a bigger whole; to make sure that Tarot readings are one part of who I am and what I do.  It’s a reminder that I can compartmentalize aspects of my life so that they create a comprehensive and complementary mosaic.

The 9 of Disks reminds me that no one can do it alone.  I need to make sure I have a community of friends and loved ones that can help me through times when I’m frustrated, annoyed or feel like a failure.  I need to build a safe space, whether virtual or real, where I can be myself and let it all hang out without worries that I’ll upset someone or be perceived in a negative light.

The two of these cards together remind me that life if a puzzle, a patchwork quilt of different experiences, different relationships and different desires.  I don’t have to always be “on” or in the mood to do readings for clients but what I must do is treat it as a profession and provide services to the best of my ability.  Even if I am not feeling in the mood the client has been brought to me by the Universe for a reason.  I own the client and the divine my respect and diligent efforts to give the best possible service.  My ego needs to be taken out of that equation.  It might be easy but at least now I have a clearer and more realistic attitude and approach to the situation.

The 2 of Disks is interesting in this deck because the image looks the same whether it is upright or reversed.  The only difference might be the focus of this card’s energy.  At first I rather had a simple message of maintaining balance and perhaps finding ways of partnering with others.  Then I had an amazing conversation with the wonderful Nancy Antenucci and during the conversation she pointed out that this card might refer to finding the balance between my left and right brains (which had come up during our chat).  Whenever I’ve taken self-administered tests to determine if I’m left-brain or right-brain focused the results are very close, almost evenly split.  I often find that my analytical brain battles my intuitive brain (for lack of better terms).  I can serve as the pathway between these two spheres.

And I once again drew the Shadow of Disks.  Quite a scary card – a wasteland.  It seems so desolate and barren; not a fun place to visit.  And yet many spiritual traditions have adherents journey into the wilderness or wasteland for a vision quest.  Even Jesus spend days in the desert by himself before he began his ministry.  My Wasteland might ultimately prove to be a path for me, a way to help others and be a spiritual helper for those who feel isolated, desolate and lost in the wilderness.

Maybe my Libra rising makes me a good connector, a bridge; someone who can help others find the balance between two extremes – solar/lunar, right-brained/left-brained, dark goddess/bright goddess, feminine/masculine.  Then again maybe I’m just blowing smoke up my own ass.  Time will tell.  I’ve always believed I was meant to make a difference in the world no matter how small.  Maybe this is my opportunity.