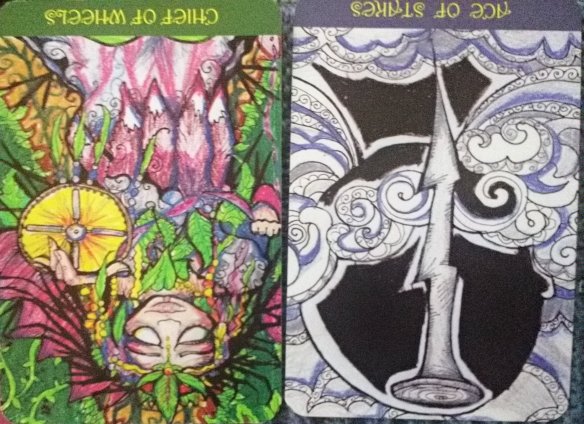 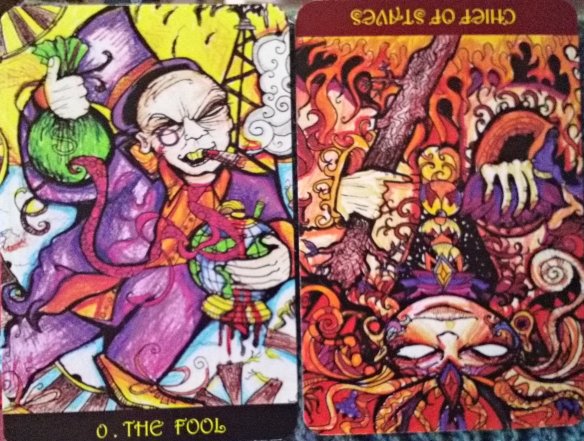 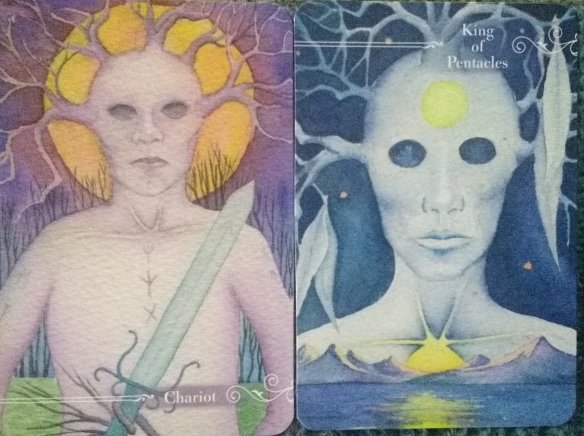 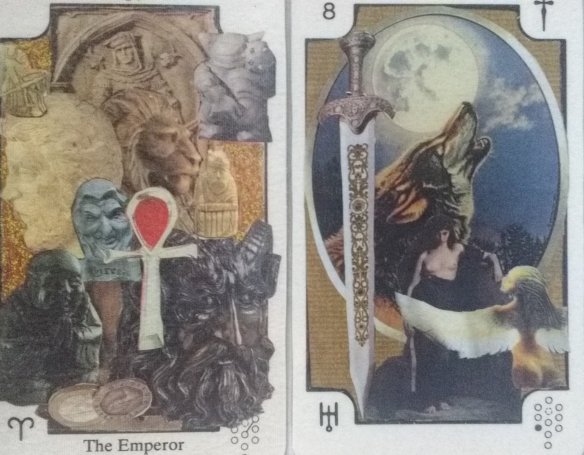 I love when I have epiphanies while doing something Tarot related. The other day I was reading a post on a FaceBook group about spirituality and Tarot. For some reason my brain clicked into overdrive and I suddenly realized something – one of the reasons I’ve been so resistant to establishing myself as a professional Tarot reading is because I do see Tarot as a spiritual tool. Charging money for spiritual work has always seem vaguely wrong to me, as though I’m prostituting a gift (just my opinion and no comment on anyone else’s choices). Or at least this is what I’ve often told myself.

While thinking about it I realized that I have invested as much time and effort into improving my Tarot skills and knowledge base as I did into completing both my masters degrees. Investing that much time, effort and money into something and then not using it is ridiculous. However this has been my pattern in the past, but no more! I feel a new determination to change my mindset about this issue. It’s time to at least make an attempt to create a successful career for myself as a professional, paid Tarot reader.

So instead of struggling with feelings of inadequacy as a reader or feeling that charging for readings is somehow sacrilegious, I’m going to start working on a plan. Right now I think email readings are the best option for me. It allows me flexibility to do readings when it’s convenient for me (usually late at night or early in the morning). I also don’t have to worry about one of the in-laws having a freak-out moment in the middle of things. Phone, instant message or Skype readings would be problematic for that very reason. I can do this, I know I can. My focus now will be on revamping my web site so that I have a page from which potential clients can learn a little about me and order a reading if they’re so inclined. It’s a baby step in the right direction.

The Book says: This card reminds us of the underlying patterns of our lives and how these patterns will affect the pursuit of goals. The Chariot is a card of fortune in relationships. Its appearance generally suggests that you are attaining your goals through discipline and active participation but that you may need to examine more carefully the effect of your power on others. Or perhaps you have made achievements that were in the common good and you are experiencing a collective victory. The Chariot card impels us to discover the power within ourselves not by steamrolling those around us but by using our vital energy towards solutions that are inclusive, productive, and sustainable.

TarotBroad’s Buzz: This card shows the connection between all existence and the cosmic energies that wind their way through our lives. To some extent the imagery on this card reminds more more the Wheel of Fortune than of the Chariot. Its imagery speaks of wheels and cycles. But the silhouette seems to be dancing the cosmos into existence – this certainly suggests mastery and control. But rather than it being “power over” (as Starhawk calls it) this symbolizes “power within”.

The silhouette has a twelve-spoked circle over her abdomen. And it’s lines go beyond her and connect to the other circles and other planets shining in the cosmic sky. She seems about ready to step into the stone circle and dance. Something about this card reminds me of the song “Lord of the Dance”. The figure’s exuberance and energy comes across and she exemplifies how if we are able to master and control our own energies, we can create amazing and beautiful things in our lives. At the same time we are aware of our impact on the lives and the world around us and try not to charge blindly ahead, and damn the consequences. It is balanced and controlled, while still allowing the creative energy to manifest itself in our lives.

The Wheel of Change Knight of Pentacles (Knights in this deck are equivalent to Kings in more traditional decks) shows an Aztec (or maybe Mayan) warrior accompanied by a jaguar looking over a pyramid.   A huge wheel engraved with symbols that is probably a calendar, stands behind him.  A beam of golden light shoots upwards to the sky from the top of the pyramid.  He holds his shield, bearing the same symbol as one on his chest, at his side.  He seems curious and exploratory rather than defensive or ready for battle.  The Greenwood King of Stones shows a powerful, peaceful and wise looking horse standing in the midst of a clearing.  a halo of small lights twinkle above his head and waves of energy seem to embrace him.

Both these cards offer a view of someone who is strong and powerful but does not feel the need to flex his muscle to show that power.  There is an essence of restrained and harnessed strength and power in both these figures.  The warrior on the Knight of Disks is obviously capable of going to battle if need be but as he is captured in this image, he does not appear to be moving ahead with the intent of engaging an enemy.  He seems more curious – as though he has found the source of his strength, power and wealth for the first time and is awed by a view that others have already seen in him.  The horse on the Greenwood King of Stones is solid, reliable and enduring.  He can work hard when the need arises but does not need to show off that strength as though it is a trick or circus act.

I get a sense of quiet competence, mastery and stability from both these images.  The horse is often view as one of the foundations upon which various civilizations were based.  The Aztec (or Mayan) empire achieved some amazing and wondrous milestones.  We are still learning about how complex and sophisticated their civilization was.  In both cases the foundation was solid and reliable.  Once that changed, civilizations fell or dramatically altered.  These figures give off a sense that you can count on them when the chips are down.  They will support and help you, as long as you’re willing to do the hard work.  They are masters of manifestation and know how to create the physical and financial environment they want.

So this leads me to ask myself am I willing to do the hard work in order to manifest my dreams into reality?  Quite frankly it’s not that I’m unable or unwilling to do the hard work; I just don’t know what it is.  I feel as though I don’t know where to start.  Therein lies my problem – I’m standing at a crossroads with no idea which path to take and not the faintest idea of where either will lead.  As a result, I’m paralyzed by indecision.  I’m consuming self-help books in an effort to seek some guidance but seem to become more confused.  Many of them offer no practical advice on achieving the goal of gainful and joyful employment.

I guess what I have to do is look inside myself and consider what my options are – what I like to do and what I do well (amazingly enough sometimes those are not the same things.  More than that I really need to work on a strategy and plan that is practical and workable for me.  There is part of me that would love to return to the safety and security (or the illusion of both) offered by a tradition job.  Then there is part of me that really wants to try to carve out a few different money-generating options that will allow me to flex my creative side and put my interests and passions to work.  On some level I guess I don’t have much to lose.  It’s not like job opportunities are knocking on my door right now.  I need to start feeling more like this King of Pentacles within myself and then I can learn how to best utilize his energies on the outside world.  I’ve got to do things one step at a time.  I need to master my own fears before I can master other things.  Once I achieve that, manifesting my dreams should prove to be the easy part.