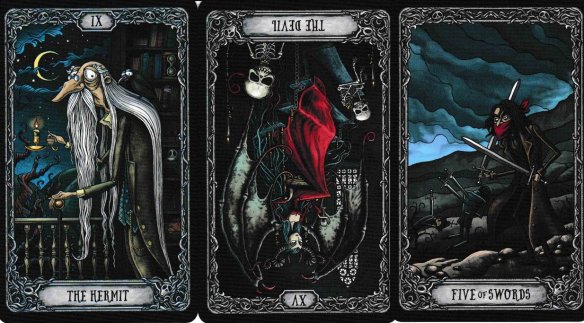 “You feel like a voice crying in the wilderness. You’ve discovered the truth and it freed you from the chains that shackled you to the illusions promised by those in power. Now you must be willing to defend that truth; cling to it despite the insistence of others that you are wrong or mistaken.” 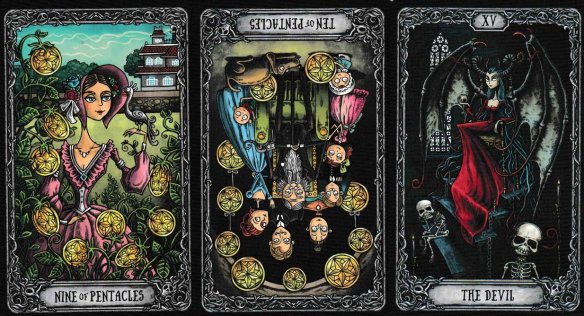 “You’re surrounded by abundance, by things, by wealth. However, this is not created the happy, contented family & life that you imagined. Have you made a deal with the devil and sold your soul for this prosperity?”

The Devil – quite a scary concept isn’t it. How often over the years have humans blamed their aggressive, inappropriate, unhealthy behaviors on some external construct? “The Devil made me do it” is often claimed in a joking manner but perhaps there is some truth to our belief that the evil, wicked things we do are because of the influence of some otherworldly entity but is this true? Does human belief in such an evil figure give it power and strengthen its hold on our psyches? Did we create “The Devil” so we could fob off the blame on something or someone else; a scapegoat? Are we so unwilling to face the darkness in our own souls that we would prefer to allow “The Devil” to claim it instead? These are probably much deeper questions than I can answer right now. Who knows, over the course of my Tarot After Dark blog posts I’ll probably express my opinion on some of these issues but that’s all it will be – my opinion. I have no expertise or additional insight and knowledge that grants me the power to find the answers for anyone but myself. I’m curious to learn where it will lead me.

So, I’ve been missing my Comparative Tarot essays and decided that I’d commit to writing one each week to share with any and all interested readers. Each week I will randomly select a card and then pull matching ones from three other decks. My goal is to include one RWS clone, one deck with a darker sensibility, one lighter more approachable deck and one collage or less traditional deck. This week I’ve decided to use the Bohemian Gothic, classic RWS, Transformational and Whimsical Tarot decks. Let’s explore what insights these diverse decks can offer into one of everyone’s favorite “bad” card.

The first thing that struck me looking at these cards is that one figure appears to be dominating or controlling the other(s). The black-winged figure in the Bohemian Gothic Devil is administering something in a syringe to the other. The recipient is resting against the “devil” and even hugging her close. The “victim” fully embraces her victimization or is she even a victim? The reality is that we can easily blame drug dealers for a loved one’s addiction but what caused them to take that first step? Very few are forcibly addicted to drugs or alcohol. In my experience, they seek them out in an effort to escape the reality of their lives. So is the drug use a cause or an effect? Self-medicating is quite a common extra-curricular activity in the US.

The RWS and Whimsical Devils both show figures that are physically chained or manipulated. They appear to be at the beck and call of whoever is at the other end of their chains.  However, a closer look reveals that those restraints can be easily removed. How fascinating because it implies that, once again, the “victim” is complicity in their enslavement. They could easily take control and free themselves from the restraints but chose not to do so. It makes me wonder about the allure of giving up control to another; to be void of responsibility for one’s actions. We see the reverse quite often when followers seek out rigid and strict religious movements. There is no need to consider what behaviors are acceptable or unacceptable – the church leaders will clearly define that for you. The bound people on the Devil cards show us the flip side of that scenario.  They can indulge in whatever depravity or “debased” behavior they desire because their master told them to do it. Quite a bit of psychological research has been done in this area and the results reveal that in most cases people are willing to do cruel, inhumane things as long as an authority figure told them to do it. Clearly being truly independent and free thinking is a rarity.

The Transformation Devil is quite a bit different in imagery but similar in message.  It shows a woman in a black dress standing behind a web, framed in red-orange flames.  Outside the frame are black & white figures, some being restrained by horned demons. Is the woman a prisoner of the web or the ruler of it?  Is she trapped or the entrapper? Perhaps she’s both.  Let’s face it, nothing in life is as black and white as we would like.  Perhaps she was trapped by her own addictions and indulgences and now seeks to trap others because misery loves company.  Or is she the only truly free figure in the card?  She may be framed by the web and flames but does not appear to be part of them or imprisoned by them. Could she be like a Crossroads Demon in the TV show Supernatural – not necessarily seeking out victims but coming when called and promising to fulfill one’s desires at the cost of one’s soul?  Sometimes I get the sense we do not value our souls as much as we should and as a result are willing to lightly trade it away for the promise of materials possessions.

Although the images on these four cards are very different their messages are similar. They remind us that in most instances our enslavement is the result of our continued choices. We have the ability to break free and move forward but that requires a strength of will and willingness to take responsibility for one’s life that many do not truly want. We may prefer the blame self-destructive, addictive and violent behaviors on some external devil but the truth is that human’s need so external influence to engage in atrocious behavior. What The Devil in the Tarot reminds us is that we do not have to remain enslaved. We have the ability to free ourselves if we also possess the desire and will to do so. It may not be easy. Let’s face it, regardless of how or why we became enslaved or addicted once we become so it can be almost impossible to free ourselves without some assistance. Even if you can’t cut those strings or pull away from that addictive devil by yourself, you can seek help once you realize that you want to free yourself. The Devil is frightening and seductive but it’s also a wake-up call. If you want to take those chains from around your neck you need to do whatever it takes to be truly free. That message is clear throughout these four very different takes on this intimidating card.

How are the ghosts of your past still influencing your life?

Oh brother, this message seems very clear to me. I’m still held fast by the poverty in which my childhood was spent. No matter what my true current financial situation, in my mind I’m poor. This results in acquisitional behaviors. Instead of enjoying and using what I already have I focus my energies on acquiring more. I become afraid that I won’t be able to buy new things so I have to do it while I still have the ability.

I realize that my current situation is very different from my childhood, however it doesn’t stop the anxiety and fear of once again being poor. Whenever something shakes my security tree I go on a buying binge to settle it back down again. I think these are the ghosts from my past that still influence my life. Intellectually, I understand that things are different now but that little match girl inside me responds instinctively. Perhaps “shopping my stuff” will help me enjoy what I already own and satisfy that itch that pushes me to buy more.

How are you enslaved? What is the answer?

Hmm, so I’m a prisoner of my own need to learn; my greed for knowledge and stuff. Sometimes I feel like my entire life is one big hyperlink. I learn about a topic and then that leads me to another topic which leads me to another topic and so on and so on. Even when it comes to hobbies, which in theory should be a form of relaxation, I feel the need to gather as much information abd materials as possible before actually beginning anything.

For example, when I collected Barbie dolls I had to research the value of the dolls. I had to learn the different face molds used. I had to discover the history of Barbie fashions. I couldn’t just relax and buy dolls, I had to add all of that information first.

The same thing happened when I became interested in Tarot cards. I wasn’t one of those people who opened up a deck and began to read. I had to learn about the history of the tarot and the different interpretations of the cards; the different ways one could interpret the cards (divinatory, psychological, etc.). I had to have a mix of modern, classic and vintage decks; a blend of mass produced and self-published. Needless to say this tendency quickly increased both my doll and Tarot collections. Don’t even get me started on my book collection!

My newest dive into the deep end is card making and stamping. Somehow within only a matter of months I have managed to acquire quite a collection of stamps, a stamp platform, a die cutting and embossing machine, and numerous collections of pattern paper and cardstock. I have subscribed to a few magazines focused on card making and paper crafts. Subscribed to and watched numerous YouTube channels. So, as one can see I am consistent in my enslavement to my obsessions. A friend and I once joked that we both have SIOID, or stress induced obsessive interest disorder. Not a clinical diagnosis but certainly one that has a negative impact on one’s bank account.

So, what is the antidote to this problem? Well to be perfectly honest I can’t say that I feel I need a solution. I like the disease. However, even I can acknowledge that part of the reason it gets so bad so quickly is because I’m using it as a way to counteract my isolation. So I would have to say that the way to address this enslavement of mine is to find people that I can interact with, do projects with, even share some of these obsessions. This might be easier said than done due to the realities of my life at this time but it is something I can do in a limited fashion. Or, I can actually put these interests to good use (creating cards & donating them to charities, for example) instead of letting them collect dust. 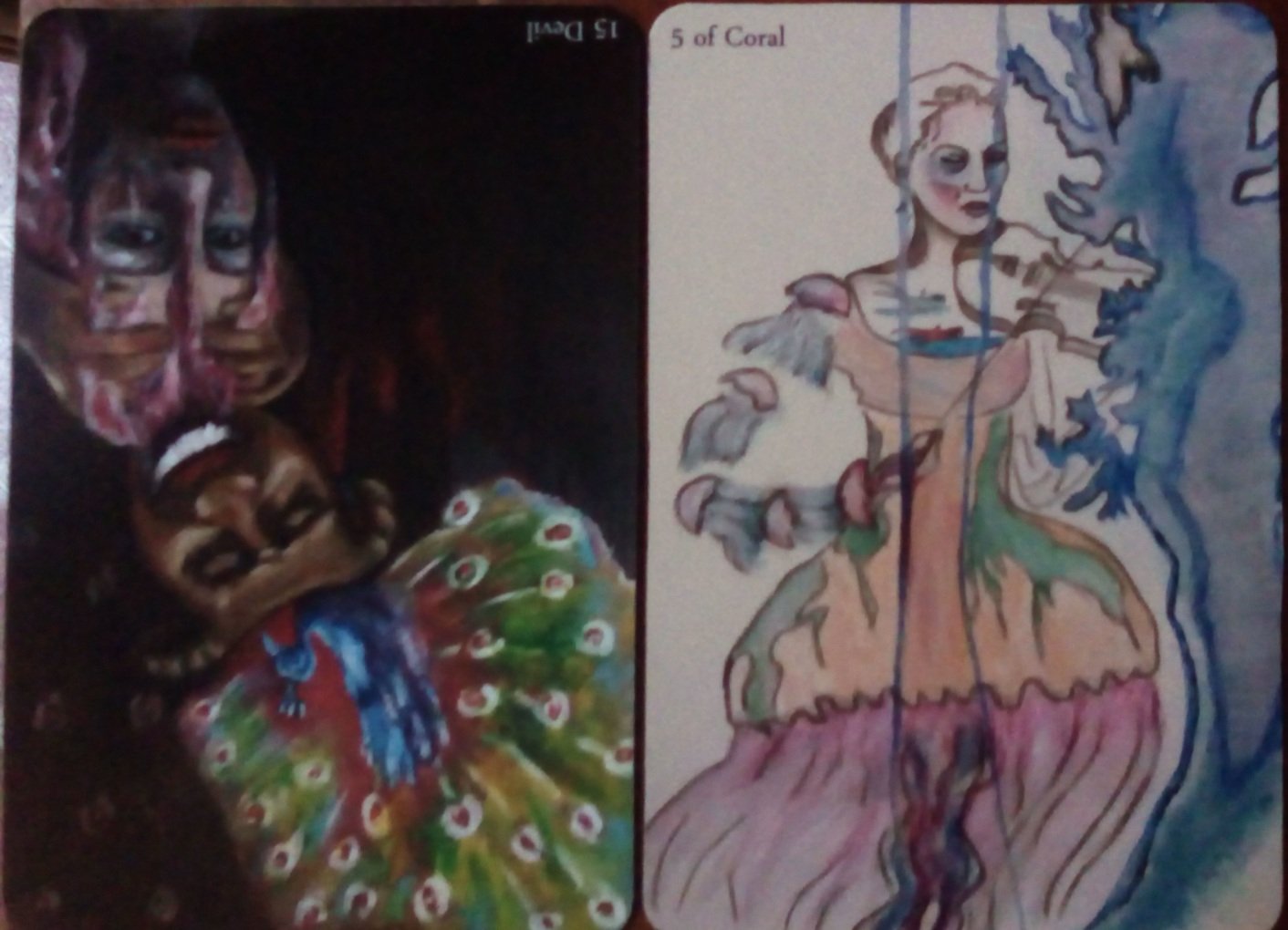 Her melancholy poured from her instrument. Her sadness shadowed her like a cloak. Although she was doing what she loved it was overshadowed by regret. She could have been doing this so much sooner if only she hadn’t let her own inner demons and the negative comments of others deter her; undermine her confidence; hold her prisoner; worm their way into her brain.

She paused for a second, shaking off those negative thoughts. That was all in the past now. she was moving forward and needed to focus on her future; no longer shackled to the past. She had found bliss and planned to treasure it.