So, regular card of the day readings aren’t working for me. So I decided to take a slightly different approach and have a daily chat with my Tarot deck.

I got the idea during Rana George’s session on Lenormand at this year’s Divination Day prior to Readers’ Studio. She said she would never do a one card Lenormand reading because a Lenormand reading is like a sentence requiring a subject, verb and object or like a conversation. It needs more than just one card. So I took that concept and applied it to my daily readings for myself. It helps put me in a different frame of mind.

So I sat down with a cuppa tea, pulled three cards and this is the message I received:

Her message:. “Stop resisting change, moving on to the next phase. You’re fighting too hard to maintain the status quo; defending yourself from imaginary threats. The only demons are in your head and if you look at things clearly you’ll realize they don’t exist. Right now the only thing you need to defend yourself from are your own doubts.” 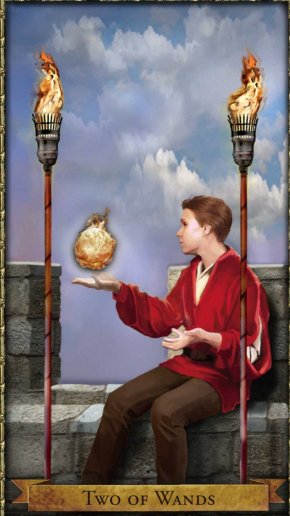 So, today while drawing my two cards I asked where I need to focus my energy; what needs my attention? I drew the Ace of Wands Rx and 2 of Wands Rx. I immediately thought of creative energy being stifled; of incomplete, unfulfilled projects. Then, while browsing through Christine Jette’s Tarot for the Healing Heart I read a passage focusing on clearing blockages and connecting with our divine spark in order to facilitate healing and felt like a lightning bolt struck me. This was my message!

It’s time to clear away all those damned blockages I’ve allowed to build up that prevent me from fully healing. It’s time to embrace that divine spark and re-experience the magic and wonder all around me. So I’m going to start working my way through this book and see where it leads. I have a feeling it will be an enlightening journey!

Today I wondered what lesson I need to learn? Where should I be focusing my energy? I drew:

I need to learn to balance my energy and focus more effectively; blend what I must do with what I want to do. It would also help if I listened to my institution, trusted my inner voice. The truth is I know what to do and how to do it but I need to listen and trust in my inner wisdom; the self-knowledge woven through my soul.

QotD: How can I feel more confident and comfortable in my own skin?  The Magician
What will challenge or support me in this?  8 if Pentacles Rx 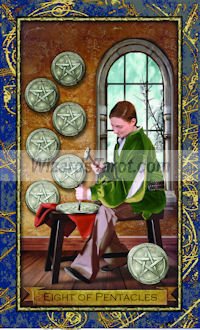 I was watching a YouTube clip of the amazing Kelly Bishop performing “At the Ballet” from A Chorus Line. Watching her burlesque before the singing struck a chord with me. Sheila (Bishop’s character) is brash, ballsy and clearly terrified. She projects a confident, almost arrogant persona which is soon revealed to be a costume; an act. As I watched her I was struck by the thought that’s how I appear to people. I may try to portray myself as cocky and confident with a “don’t give a shit” attitude but the truth is I’m far from that.

I learned to don that persona as an adolescent as a way to protect myself from the teasing and petty cruelties of other children. I won’t say that I was bullied but kids are kids and I was different. I was not good at fitting in simply because it didn’t occur to me. The end result was that I was often teased and mocked which made me defensive and aggressive. Over time I learned to laugh at myself but deep down I’m still that confused child who doesn’t understand how to fit in and why I’m different. So I burlesque; I create a stage persona and don her as needed.

At Readers Studio I’m considered a charter member of the “bad girls’ table” (a term I hate because it implies we’re misbehaving children when in reality we’re simply doing our own thing. I prefer the “wild women’s table but what can you do?). I can often feel myself slip into performance mode when interacting with people I don’t know. I’m uncomfortable in large groups so the protective coating feels necessary. Unfortunately, I also slip into character when I’m with friends. I think sometimes it’s become second nature to play the role. I’ve gotten better at realizing it but it’s still a work in progress. So I decided to ask the Tarot for some tips on working through this.

I had to smile when I saw these two cards appear. The message was at once simple and deep.  The only way I will feel more confident and comfortable in my own skin is if I will it to be so.  I am the Magician of my own reality; creator of my own magic.  The only thing blocking me is me.  All the training, experience and hard work I’ve invested in myself in the past will support me now.  I simply have to remember the lessons I’ve learned and not let the inner demons of self-doubt sidetrack me.  I’m not a child anymore.  All that past petty schoolyard cruelty can’t hurt me anymore unless I allow it.

QotD: What is the best use of my time & energy today? Ace of Swords Rx
What challenge or supports me in this? Ace of Cups

How fun! So I need to not get so lost in my head, seeking answers in an intellectual, rational way. Instead, it’s time to listen to the wisdom of the heart; trust my intuition.

I think in a very real way this message is to stop resisting any psychic, intuitive abilities I have and instead embrace them.

As I was shuffling my deck I asked where I should focus my energies today. I laughed a bit as I drew the 9 and 8 of Coins. Looking at them I was reminded of a line spoken by Mr. Spock in the classic Star Trek episode Amok Time. Mr. Spock believes he has just killed Captain Kirk in a battle over Spock’s wife T-Pring. When questioning her about her motives for demanding a challenge T-Pring explains that she was tired of being the consort of a legend and wished to be the wife of Stonn, her companion. Spock admires her logic in pursuing her goals and explains to Stonn that he may find that having is not so great a thing as wanting. This line has always stayed with me because it feels like a profound truth; something of which we all seem to lose sight. To be fair, I have always felt that Gene Roddenberry (and Rod Serling for that matter) was a genius and visionary so I shouldn’t be surprised.

As positive as the 9 of Coins is often considered to be, I often find myself thinking about becoming imprisoned by your possessions; becoming like a dragon sitting atop its hoard, unable to move forward. I have found myself falling into this scenario on quite a few occasions. I become so focused and obsessed with acquiring things that I forget to have fun with them. This has resulted in a larger than necessary collection of cookbooks, dolls and Tarot decks (I know, I know – how can one ever have to many Tarot decks?). I have learned that there comes a point when having too many things prevents you from enjoying them because you become overwhelmed.

I also think many humans are hardwired to pursue; to need goals to work towards. My hubby and I often talk about when we were kids saving money up for some toy or electronic device and how much sweeter it was to get once we’d finally saved the money. With credit cards, few people experience that anymore. It’s so easy to instantly gratify our ever whim and desire and then repent when it’s too late.

These two cards remind me to take time to “shop my closet”; to enjoy what I already own and spend less time lusting after new “pretty shinies”. As lovely as each deck might be, do I really need 5 different animal themed decks or 20 RWS variations? I own numerous decks that are lovely to look at but which don’t really speak to me. Maybe now is a good time to release them into the wild. This is my opportunity to begin working with my decks again rather than petting and gloating over them like Gollum with his “Precious”.

Am I the only one who finds herself in this situation? Somehow I doubt it. If it’s one thing I’ve learned in my years in the Tarot community it’s that we’re all collectors, acquirers and hoarders on some level. It doesn’t take much to quickly find yourself in possession of more decks than you ever dreamed possible. Online communities contribute to this by generating buzz for new decks and creating a “must have it now” mentality that often leaves us with more decks than we want, need or can use. Moving forward I plan to resist these urges and begin purging the decks I already possess so that I pare my collection down to more manageable levels. It turns out Mr. Spock was quite correct about the difference between having and wanting. 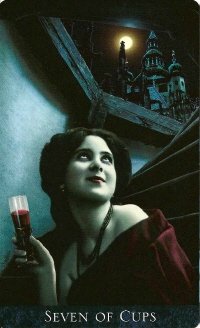 What goal do I have that is stalled because I am overwhelmed? How might I best move forward?

The best way for me to move forward is to get more realistic and practical about matters. Wishes are wonderful things and can be quite a motivating factor, however they can also easily become a trap. Instead of dreaming about things that are unlikely to happen, such as winning the lottery, now is the time to focus on somewhat more realistic and practical dreams and goals.

This actually ties in quite nicely with yesterday’s reading reminding me that I need to narrow the field a bit because time has become more limited. This is a lot to think about and a lot to work with moving forward.