So, I have noticed my pattern of butting heads with authority figures.  It’s not that I don’t respect people in positions of authority, it’s simply that I refuse to respect them merely because they’re in a position of authority.  In fact when I run into “authority figures” that assume they’re entitled to respect because of position and/or money, I tend to get confrontational.  It brings out the worst in me.  In fact I’d had incidences where I’ll run into an authority figure (usually an alpha male type) who raises my hackles so much I feel the urge to growl and bare my teeth at him.  I can’t necessarily pinpoint why I react this way.  It tends to occur exclusively with male authority figures.  I get along quite well with most female authority figures – especially those labeled ball busters.  So that clues me in that one of my issues has to do with gender power dynamics too. 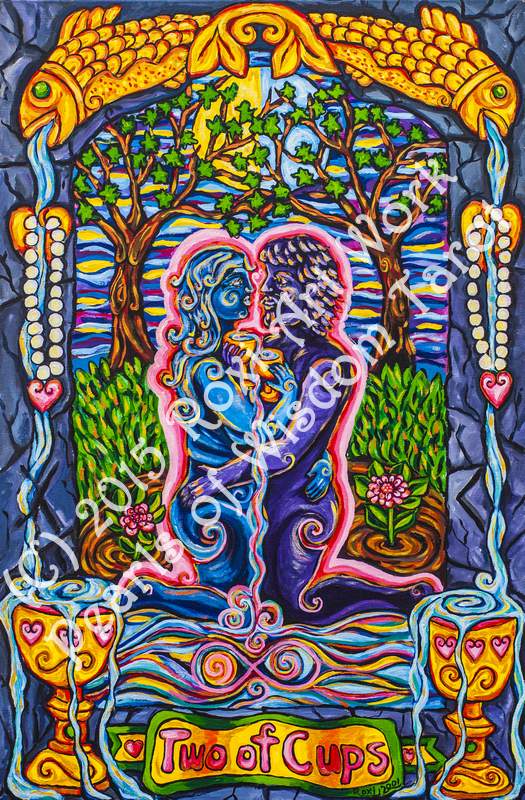 I decided to use Tarot to ask the universe “What is my relationship to authority?”  I drew the 2 of Cups from the Pearls of Wisdom Tarot.  Looking at the image I was struck by the way both figures in the card seem to be equals.  They are both grasping a chalice in one hand and touching their partner intimately with the other.  They each gaze into each other’s eyes and are approximately the same size and height.  Each figure has a flower behind them and a tree beside them.  Both figures are framed by a fish, necklace and chalice.  There is a balance present in this card, a sense of equality and true partnership.  The power and authority in this relationship go both ways.  Perhaps their powers are not identical but they are equal.

That suggests my issues with authority flare up when things are not equal.  I have no problem with authority figures who treat others with the respect and courtesy they expect.  I also prefer the give and take with an authority figure who is as open to listening as she/he is to talking.  Perhaps there is truth to the fact that most women’s management styles are more inclusive than many male managers’.  Those are broad stroke generalizations but in my experience they’ve proven true. 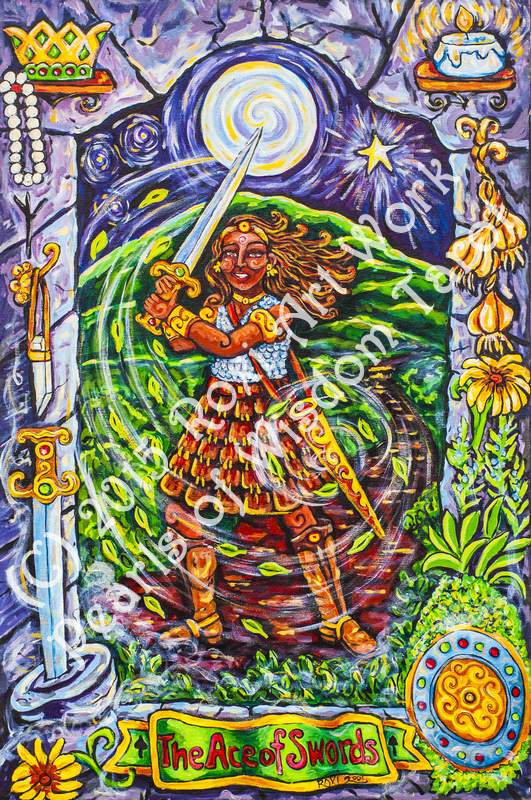 My next question to the Universe was “Why is my relationship to authority this way?”  I drew the Ace of Swords.  My immediate reaction was that my relationship to authority causes me to feel the urge to cut through the bullshit when faced with one of those negative authority figures.  I feel the urge to confront and puncture their egos.  It’s not necessarily the most mature response but it’s true.  Maybe on some level I also hope that confronting them on their behaviors might open their eyes and allow them to explore new ideas and beliefs about power and authority.  I suppose one can always hope (and keep on fighting!).