Have you ever done a burlesque act? You know what I mean, done a song and dance number to hide the truth about yourself from someone else? It’s probably a defense mechanism you’ve developed to protect yourself after feeling hurt of victimized at various points in your life. I do it all the time. I joke about the pain and difficult experiences I’ve gone through to deflect questions I’m uncomfortable answering. I don my “tough broad” armor to repel any attempts to breach my defenses and get to the heart of me.

I realize this can be counter-productive simply because it’s creates situations in which I’m isolated and feel abandoned but that’s my own doing. I create self-fulfilling prophecies in which I don’t let people in because I’m afraid to trust them but then when I need them no one is there because I pushed them away. In my script, however, I’ve been “abandoned”. It’s screwy and I own it but I’m also taking steps to change this pattern. Quite frankly I didn’t even realize how often I do this until I was reading several blog posts by Sheila O’Malley about this tendency in the Dean Winchester character on Supernatural. As I was reading her analysis something clicked in my brain and I realized how often I do exactly the same thing. I think Dean and I might both be like Charles Durning’s character in Best Little Whorehouse in Texas – dancing my little side step. 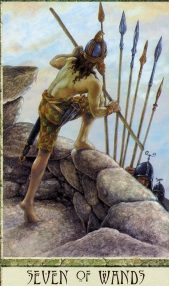 This can be diverting and a very useful survival tool for brief periods of time. Over the long haul it can eventually create more problems than it solves. As I mentioned, when you are constantly burlesquing people don’t know when to take you seriously. They aren’t sure what is a true issue versus a humorous skit. I’ve done this myself, I make my pain into a comedy routine so people are never sure how serious the pain is. Hell, sometimes neither am I. Don’t misunderstand, I’ll never completely give up the burlesque act because it also serves as a filter – people who are repelled by the burlesque act probably aren’t folks I want to incorporate into my life anyway. Those that are willing to stick around will eventually see the more serious me. In fact they may quickly grow to regret that. Either way the point is that there isn’t anything wrong with putting on a burlesque act. I think it can be healthy and a powerful survival tool. It only becomes problematic when you can’t stop the act; you can’t allow anyone beyond those defenses. It might seem safer but I imagine it’s a lot lonelier too.